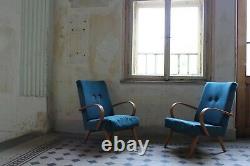 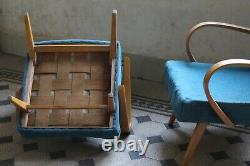 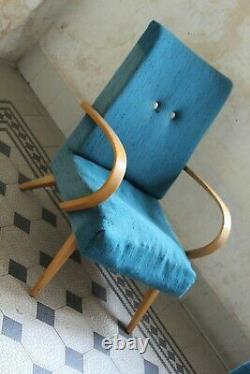 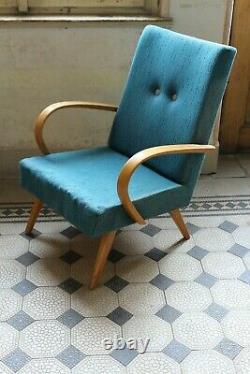 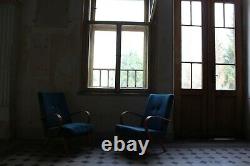 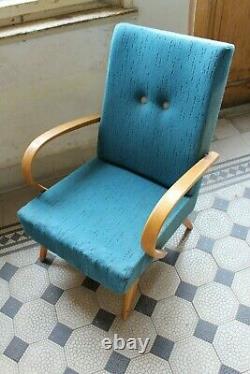 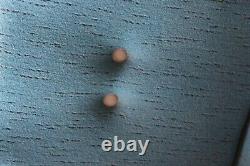 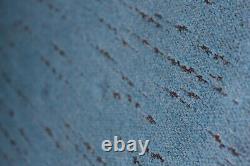 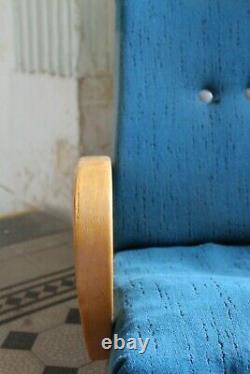 A great looking pair of mid century armchairs that were made in The Czech republic sometime in the 1960's. Chairs use one long piece of Beechwood that has been.. This particular model is a 1960s version of the earlier halabala bentwood chairs. A cool looking chair, standout design, hooped bentwood arms and clearly the chairs are very much influenced by those designed by Jindrich Halabala. Made in later times at the UP.

These ones have the original fabric, that is typical of the style and material used during 1960s, tapering legs create a pleasing atmosphere to the eye, bringing a lot of style into any room within the house. Czech industrial designer, writer, and educator Jindich Halabala was a significant proponent of modernist, industrially manufactured furniture in Czechoslovakia and had a tremendous influence on the interior design of many interwar and postwar Czech homes. Born in 1903 in Koryany, Halabala spent his formative years training as a cabinetmaker in his fathers joinery workshop before entering the state-owned woodworking school in Valaské Meziíí in 1920. He completed his practical studies with woodworking company Associated Arts & Crafts Enterprises, known as UP (Spojené Umleckoprmyslové Závody), in Brno.

After graduating in 1926, Halabala worked briefly at the studio of Bohumil Hübschmann in Prague, until he was hired by UP. Halabala quickly became the firms development manager, responsible for product promotion and sales strategya position he maintained until 1946. Believing that furniture should be fully functional, modular, mobile, and widely affordable, Halabala advocated for a new mass-market approach to furnishing, ultimately pioneering industrial furniture manufacturing in Czechoslovakia. The item "Pair Of Mid Century Vintage Czech Halabala Style Armchairs Chairs 1960s" is in sale since Sunday, February 9, 2020.

This item is in the category "Antiques\Antique Furniture\Sofas/Chaises\20th Century". The seller is "infous" and is located in Prague. This item can be shipped worldwide.